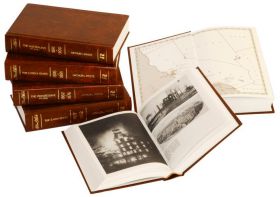 This six-volume biography of Adventism’s special messenger is also a history of the first seven decades of the Seventh-day Adventist Church. The author, a grandson of Ellen White, uses family and personal anecdotes to add depth and authenticity.

Volume one of the Ellen G. White biography traces her activities through her developing Christian experience, the Advent movement and disappointment of 1844, and how she became the recipient of visions. It deals with her place with her husband and Joseph Bates in laying the foundations of the Seventh-day Adventist Church, and discloses the vital role the visions had in this development.

This volume, as well as those which follow, help Ellen White become better known as an individual–a wife and mother, a neighbor and friend–as well as the messenger of the Lord, laboring tirelessly in the pulpit and on the public platform in declaring God’s message and in counseling often and writing incessantly, with influence felt the world around.

Volume two of the Ellen G. White biography traces the development of James and Ellen White’s leadership roles in the infant Adventist church. By 1875, their roles were well-defined–James as apostle and organizer; Ellen as messenger of the Lord.

The events covered in this volume include the health reform vision of 1863, organization of the General Conference of Seventh-day Adventists, establishment of Battle Creek College, and the beginnings of a church-sponsored journal, a publishing house, and a medical institution in the West. J. N. Andrews was sent as a missionary, camp meetings were introduced, and Ellen White became a much-sought-after public speaker and a prolific author. James and Ellen became advocates of good health and urged reform.

Volume three picks up the Ellen White story at a high point in her ministry–a time when she was writing on the life of Christ and also engaged, with her husband, James, president of the General Conference, in a grueling camp meeting labor that had become a recurring summertime activity. The last years of James White’s life were marked by notable achievements in building the church and its institutions in spite of periods impaired by illness. His rather sudden death at the age of 60 shocked both Ellen White and the church.

Now midway in her lifework, Mrs. White, more than ever, was dependent on divine aid and support as she continued her ministry of writing, counseling, and public speaking across America and overseas. The church was growing rapidly and needed an increasing number of ministers and executives to manage its burgeoning conferences and institutional structures. Some of the these leaders were new in the doctrine and had limited managerial experience, making Ellen White’s role as the messenger of the Lord complicated and involved. This, together with the fact that many members and leaders resisted reproof, correction, and guidance, cast upon her a burden that at times was almost too heavy to bear. This was particularly true as the church passed through the crises related to the General Conference session at Minneapolis, Minnesota, in 1888.

Reviewing the history of the church from 1876 to 1891 is an inspiring experience that strengthens one’s confidence that God is guiding His people.

The nine years Ellen White spent in Australia introduced her to new and different living and working conditions. It also placed upon her responsibilities in some areas she had not previously borne. Nearing her sixty-fourth birthday, she was reluctant to interrupt her work of writing and leave America for a distant field of labor, but near the close of her sojourn she could write, "God sent me to Australia."–Letter 175, 1899.

The resources from which this volume was developed have been full and exceptionally rich. Ellen White, anticipating a published account of her work overseas, reported, "I have kept up my diary, as afar as possible, of our labors in Australia and in Europe."–Letter 36, 1910. Her experience in producing biographical sketches of her life in 1860, 1876, and 1885 led her to see the value of such records. The manuscript "Australian Experiences"; her diaries; her reports of activities in the Review and Herald; and her correspondence, especially letters to her sons Edson and William and two or three close associates in America, have provided the prime sources

Ellen White performed a dual ministry in Australia. She virtually pioneered the work in that new field; at the same time she nurtured and counseled, through her letters, the church in America, presenting what God set before her in vision. She wrote carefully and with sympathy and understanding, but at times there were firm message pointing the way God would have His work managed, or correcting a course of action on the part of individuals that if unchanged would be detrimental to them and to the cause of God.

This volume will help you see Ellen White as an individual–a wife, mother, neighbor, and friend–as well as the messenger of the Lord, laboring tirelessly in the pulpit and on the public platform in declaring God’s message and in counseling often and writing incessantly with an influence felt around the world.

Volume five of the Ellen G. White biography explores Mrs. White’s deep involvement in the events and changes that took place in the Seventh-day Adventist Church during this period: the 1901 and 1903 General Conference Sessions, the Battle Creek Sanitarium fire, the Review and Herald fire, the threat of pantheism, and the establishment of sanitariums in California.

The author, Ellen White’s grandson, began the series with volumes five and six because they were closer in time to us, and there were people living who knew Ellen White and how could be interviewed. In addition, the issues that followed quickly on the turn of the century have a particular relevance to the church at present.

This last volume in the six-volume biography of Ellen White is devoted to the last decade of the fruitful life of this messenger of the Lord. It covers the establishment of the Loma Linda Sanitarium, the San Francisco earthquake, and the establishment of Pacific Union College. During this time she also published the 1911 edition of The Great Controversy, and during the next few years produced several other books.

Although the author (Ellen White’s grandson) spent his working lifetime involved in the custody of the Ellen G. White writings, as he did the research for this biography, he was amazed at the frequency and number of visions given to Ellen White during the last decade of her life. What did not amaze him, however, was the substantial influence these visions exerted as the counsels given were heeded and the reproofs were received and integrated into the thinking and actions of church members and leaders.

It was the author’s wish and prayer "that the portrayal presented in this volume, which covers the crowning decade of Ellen White’s ministry and sets forth her optimistic attitudes, her concerns for the church, and her confidence in its triumph, may help us to know her better, understand her ministry more fully, and lead to the reading and rereading of the counsels she has left as a legacy."