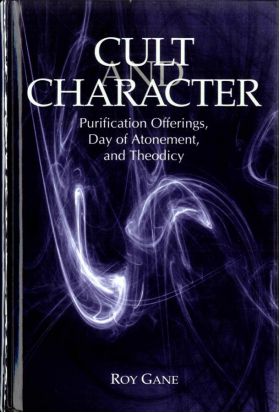 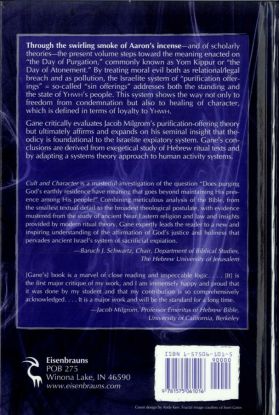 Through the swirling smoke of Aaron's incense, and of scholarly theories, the present volume steps toward the meaning enacted on "the Day of Purgation," commonly known as Yom Kippur or "the Day of Atonement." By treating moral evil both as relational/legal breach and as pollution, the Israelite system of "purification offerings" = so-called "sin offerings" addresses both the standing and state of YHWH's people. This system shows the way not only to freedom from condemnation but also to healing of character, which is defined in terms of loyalty to YHWH. Freedom and healing come together on the Day of Purgation, when purification rituals benefit those who show themselves loyal to YHWH by affirming the freedom from condemnation that they have previously received. The effects of purification rituals on YHWH's sanctuary and community profile harmony between justice and kindness in the character of YHWH as he deals with imperfect people of various kinds of character by pardoning and clearing the loyal but condemning the disloyal. Thus, Gane ultimately affirms Milgrom's seminal insight that theodicy is foundational to the Israelite expiatory system. Gane's conclusions are derived from exegetical study of Hebrew ritual texts, informed by controls to ritual analysis developed in the course of prior research through critical examination of existing ritual theories and by adapting a systems theory approach to human activity systems.
From an Adventist perspective.
"[Gane's] book is a marvel of close reading and impeccable logic.... [It] is the first major critique of my work, and I am immensely happy and proud that it was done by my student and that my contribution is so comprehensively acknowledged...It is a major work and will be the standard for a long time." -- Jacob Milgrom
"Gane's Cult and Character is a marvellously illuminating work; he has shed light on many key issues and covered exceedingly complex questions very clearly." -- John Goldingay, Fuller Theological Seminary
"By way of summary then, Gane’s work as a whole is clearly written, well researched, and full of insight into the Israelite cult. Most important, it proves well—and it seems unequivocally—that one can no longer argue that the purification offering only cleanses the sanctuary itself (and never the offerer). While this review has raised questions on whether Gane’s counterproposal should be adopted, it gratefully acknowledges that Gane has made a very important contribution here and has opened up extremely important avenues for further research and exploration."—Jay Sklar, Covenant Seminary in Review of Bblical Literature, April 2007

"This is a substantive work that makes a significant contribution to scholarship on biblical sacrifice. It will repay careful reading (and rereading)." --William K. Gilders, Emory University, Atlanta, GA, in Catholic Biblical Quarterly 69, 2007.